How to tell turtles and tortoises apart?

Turtles and tortoises are known as “turtles” with no teeth and specific shells as primary characteristics.

Turtles have been living mostly in water ever since the beginning of times. The flattened and streamlined shells along with the webbed feet are what makes the special. Most turtle species are primarily carnivorous, but their diet is rather omnivorous. Unlike the sea turtles that can live for a century, turtles can comfortably live for 20-40 years.

The painted turtle, the red-eared slider, the Mississippi map turtles, the African side neck turtle are the most common turtle species that do well in captivity.

Unlike turtles, tortoises are lousy swimmers as they are land-dwellers. The present a domed and large shell, with stubby feet and tiny claws. The majority of species is vegetarian, but the diet is rather omnivorous. Most tortoises are going to live longer than turtles (80 to 150 years); it depends on species.

It’s pretty standard for people to take the box turtles as tortoises mistakenly. It’s because of their land-dwelling habits and the large domed shells. We should highlight that they are included in the American pond turtle family, nevertheless.

In all fairness, they’re semi-aquatic and like the high humidity and swamp-like/muddy conditions quite a lot. If you’re curious, you should take a closer look at their toes and notice that they’re not stumpy, but rather paddle-like.

Should you get a turtle for a pet?

It all depends on your devotion and willingness to care for them. Don’t forget that turtles need an equivalent of a small indoor pond as adults. The red-eared sliders (the most common species you can find in pet stores) can get as big as 12″ in diameter, and no small tank is going to do it.

You need water filtration systems useful for the tank as turtles are quite messy. There are plenty of options to choose from for the turtle tank, but you should remember that you need to take good care of it for maintaining it efficiently continually.

If there’s one thing to say about turtles is that they do love to eat. Even if you can get turtle pellets in any pet store, you shouldn’t rely on it exclusively as it’s not enough for their nutritional needs. You need to add plenty of various food (live fish, insects, and snails, including). Some vegetables should be on the list of foods for your turtle too.

One thing that many turtle owners keep forgetting is the UVB light bulbs. They maintain the bones hard, and no turtle owner should undermine the importance of UVB lighting for the health of their pet. Regular beak and claw trimming, and occasional vet checkups are on the list of any turtle owner.

Don’t get us wrong. Turtles are great as they’re curious, have great personalities, and can recognize their owners. However, there are many problems attached to having a turtle as a pet. They pose a high risk for salmonella (handling a turtle should always be followed with a good session of hand washing) so make sure you do due diligence before rushing in the pet store.

What’s it like to have a tortoise as a pet? 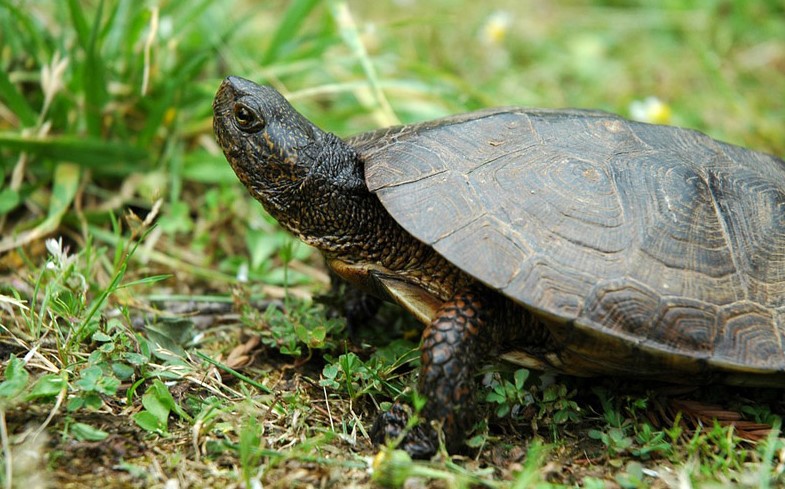 Even if tortoises aren’t as active or fast as turtles, they also need plenty of space for exercise. They don’t like boundaries, which is why the classical aquariums and terrariums with see-through glass walls are never a good idea. A “tortoise table” is going to give some results, but tortoise love to spend time outdoors.

As long as the conditions are proper, you can take the tortoise out for a spin (sort to speak). Remember that they don’t go well with other house pets (dogs and cats especially), with dogs biting the tortoise quite often. If you have any other pet, you should always check on them.

If you were worried about turtles getting too big, you’re going to freak out about how big a tortoise can get. Some species (Greek tortoise is one good example) aren’t going to grow bigger than 8 inches in diameter, but others (the Sulcata tortoise) can even get up to 30 inches in diameter, and weigh 200lbs.

As for the diet, tortoises are mainly herbivorous, so grasses, vegetable, and fruits are on their diet list. It’s messy and cheaper than in the case of turtles.

You can handle a tortoise with many of them fancying a pleasant petting on the shell. They don’t bite (unless you’re wearing some painted finger or toenails that look a lot like some fresh fruits). They can easily outlive you so buying one means that you may also be buying it for your nephews to come.

What about the box turtles?

Box turtles resemble the tortoise on many levels. However, they need a high protein diet, which is going to increase the spending and cause a lot of mess too. They remain at a manageable size, which makes them an excellent choice for the first-time turtle.

No matter which one you choose, you should always be an informed pet owner. Some don’t recommend the turtles and tortoises as first pets, but that’s because of poor experience of the future owner, and not because the animals don’t do well as pets.

If you have the dedication, the time, and the money for taking good care of your pet (it’s all the same at the end of the day), you shouldn’t postpone on getting yourself a turtle, a tortoise or a box turtle. You’re getting the chance for a lifetime friendship and beyond J

Turtles can make great pets, but do your homework first