We all love the long-time favorite goldfish bowl, even if all sorts of small fish tanks are hitting the market as we speak. You can have an adorable fish tank in the small college dorm room. Even if they look beautiful, are they perfect for your fish? As long as you take good care of it, small aquariums make it a dependable choice for your fish.

What’s the best part about the small fish tanks?

The main benefit of small fish tanks is that anyone can have one. You don’t need to spend a lot of money, nor do you need a generous space for displaying it.

Nursing home patients, college students in dorms, apartment dwellers, and even a small school classroom can accommodate a small aquarium. Besides, the “no pet” rules may not also apply to fish in an apartment building.

Watching fish is relaxing, and it’s a great way to teach your kid about taking care of another live being, especially if you’re not allowed for taking larger pets in.

When it comes to fish tanks, there are plenty of misconceptions about both the large and the small fish tanks. Let’s take a look at some of them so that you can decide for yourself which size fits your needs and budget better. 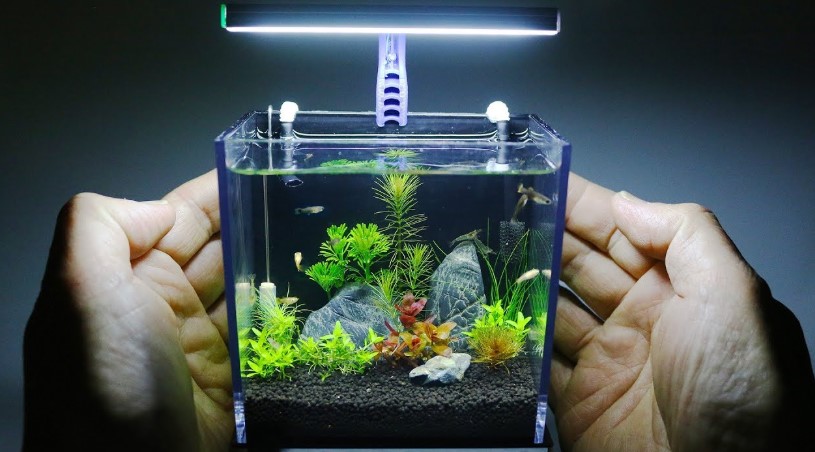 Regardless of many thinks, it’s easier to take care of a large fish tank as opposed to a smaller one. In the case of a 10-gallon fish tank, you can’t take any risk. It’s typical for the little fish tanks to be both overcrowded and overfed. The waste is going to collect a lot faster, so you’re going to have to clean it even sooner than expected.

How do we end up with overcrowd small tanks anyway? Didn’t we dream about a big fish aquarium in the first place? Even if you’re going to have to put some muscle into changing the water in a big fish tank, you’re not going to do it as often as with a small fish tank. For instance, you only need a 5-gallon bucket and a siphon for changing the water in a fish tank up to 55-gallons.

When the fish tank is more significant than that, you should use a changing device that you attach to the faucet for easier and faster change.

It’s not entirely faux, but it depends a lot on the equipment that you’re using. An external filter is louder than the internal one. A pump and an airstone can become noisy.

From what we’ve noticed, a larger filter is going to lead to a deeper sound, which can also be soothing to some. Don’t use an air pump unless you have to. Air is going to enter the tank through the surface agitation, which results from the filter returning the water. When you’re using an under gravel filter, you should use an internal powerhead as it turns down the volume a lot. Look for a good powerhead with aerators as it can also oxygenate throughout the whole fish tank.

No matter how much attention you may be paying, there’s always a risk for a leak. It’s not the case of the high-quality fish tanks, nevertheless. When you’re placing the aquarium on a flat and sturdy surface, you shouldn’t stress much about the fish tank leaking. That is if there’s no high stress on the seams of your tank. Even if you may miss it, you should always check the silicone seams carefully when buying. You may notice the air bubbles or the free gasps right in the shop.

Nobody can tell if or when your fish tank is going to leak. It’s pretty obvious though that in the case of a small fish tank, the amount of water isn’t going to cause a disaster like the water coming out of a giant aquarium.

Is there a downside to having a small fish tank?

Just like any other aquarium, small fish tanks need maintenance as well. When you’re buying a fish tank, don’t forget that you’re going to have to take care of it regularly.

One of the main downsides when it comes to small fish tanks is that problem can occur all of the sudden and even without the possibility for a fast resolving. It’s the low volume of water in which the fish lives, as the chemistry and temperature can take for a turn in a couple of hours or even minutes. Monitoring the condition of the water 24/7 is fundamental when using a small fish tank.

If you’re a newbie, you should be more attentive during the initial break-in phase. Toxins in the water are going to become a problem out of nowhere when the biological system is in its early stage. When you’re not changing the water accordingly, the levels become deadly in no time. You should always test the water, so having a water-testing kit around the house is mandatory. You may also talk to a local pet shop and have someone come from testing if you feel you’re not cut for it just yet.

How to choose the size of the fish tank?

You should always think of the size of the room when buying a fish tank. You shouldn’t get a considerable aquarium if you don’t have the room for the filter system and the heater.

A small fish tanks that come with the right amount of features is a great choice when you don’t have the space for a large aquarium. Look for one that comes with filtration system, hood, and built-in light. You can find tanks as small as 2 gallons.

Some stores provide small fish tanks that come with all the items and accessories you may need. If you’re not buying a cold-water fish, you may need a fish tank that can work with a heater that maintains the right temperature in the tank.

Some suggestions before you go shopping

As fish are cold-blooded, they’re going to keep their body temperature adjusting to the temperature in the tank. The water temperature that the fish needs is essential when looking for fish tanks.

The size of the fish matters as well and you can only put small fish in small fish tanks. Goldfish isn’t an option as it grows pretty fast and produces a lot of waste as well.

Here are some of the best choices for a small fish tank:

Mini Aquariums: the Pros and Cons of Small Fish Tanks